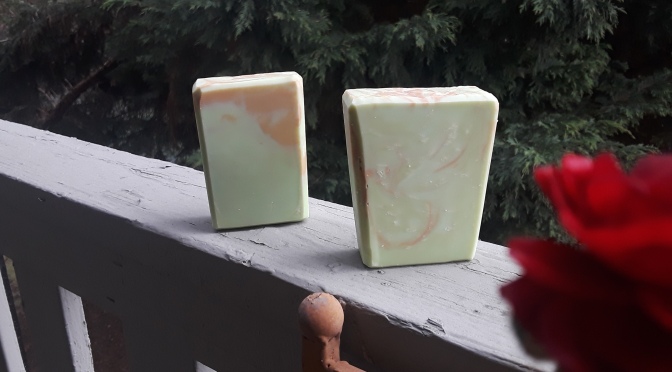 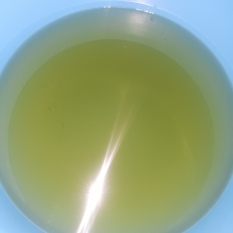 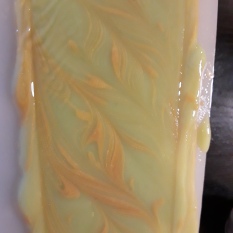 You can walk into many stores and find Bastille soap sold as Castile soap and the argument continues among them.

Let’s look at the history of olive oil soap.

What we now call Castile soap was first believed to have been made in the same region in Syria as Aleppo Soap, in which incorporates laurel berry oil with olive oil.  “Castile” is named after a region in Spain, which it was given after the Crusades( 1095-1291) brought* it to Europe and the Europeans named it as such. However, the process of making 100% olive oil soap was spread all around the Mediterranean region.

The true origins of soap are lost to time and we are left with legends, the word soap itself is believed to be named after Mount Sapo, a fictional mountain somewhere in the vicinity of Rome. The earliest known documentation of soap making was written down by the Greek-Egyptian alchemist Zosimos of Panopolis around 300 B.C.E.  The oldest soap ever found was excavated in the ancient city of Babylon and dated back to around 2800 B.C.E.

There are several other variations on 100% olive oil soap that I have found throughout history, Savon de Marseille was an olive oil soap made in France with sea water first documented in the 1300’s. Nabulsi soap which was traditionally made by women in West Bank, Palestine before there was an industry, before the 10th century. Beldi soap also known as Savon Noir which has been made in Morocco for centuries is a gel like soap made from macerated olives, ashes and olive oil.

Regardless of what you call it and why, 100% olive oil soap is a very mild and wonderful soap, it takes about a year for it to fully cure. Depending on the type of olive oil you choose to use this soap may take hours or days to become solid enough to unmold. Once it hardens it can become crumbly so you have to keep an eye on it. Mine did become crumbly and work prevented me from cutting sooner but I was able to hide most of the crumbling when I trimmed up the edges. I recommend checking it daily so you do not end up cutting a soap that will crumble on you. I do highly recommend saving good quality olive oil’s for your kitchen and using lesser quality olive oil or pomace for your soaping needs.

This soap will need about seven months to a year for curing, some people even wait longer, you will want to select a fragrance that will really last, if you choose one at all. A large portion of fragrances will loose their scent before the cure would be finished. A steep water discount gets you the lower end of the cure time, I did mine at 33% of the oil weight or roughly a 28% lye concentration. Before this soap is fully cured it can feel sticky when used. it’s not a soap to make if you are an impatient soaper. 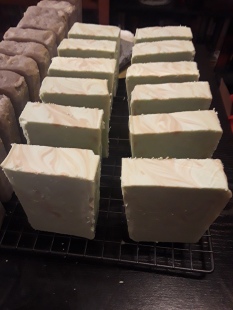 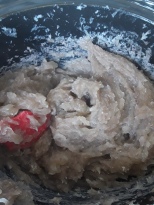 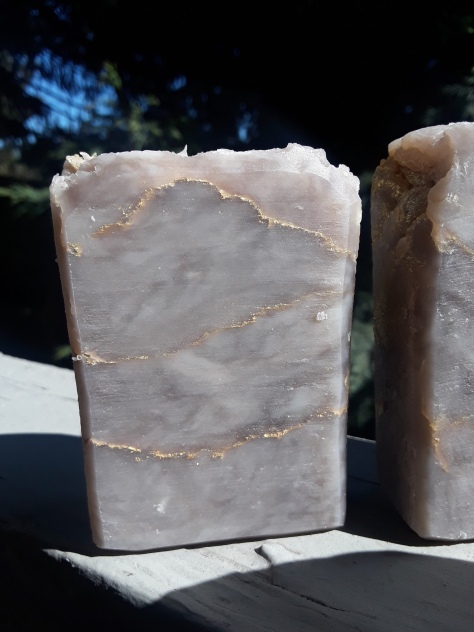 My biggest area of error when I make soap is remembering the fragrance oil and pre-planning what it will look like. I try to have different levels planned for how it should look. I plan an “ideal” and an “it’s too thick for that/I won’t have the time” backup plan, which is scaled back in case of acceleration. My plan for forgetting the fragrance oil is just to not forget the fragrance oil.

So I added the mica into the crockpot and mixed it in three areas with some white in between and started scooping it into the mold… but then I remembered the fragrance oil! So I decided to scoop things back into the crock pot, add the fragrance and try to get it all properly mixed in without mixing all the colors together, which I mostly failed at since this was hot process. The purple and the brown mostly became one. I should have added more color to compensate for what I had done but I had put my mica’s away already and decided to just go with things as they were. So things didn’t quite turn out to plan, I am still pleased with the end result.

This was a fairly standard plant based recipe with coconut, olive, palm, shea and castor. I am using a green tea infused butter to superfat this recipe to make it a little special. 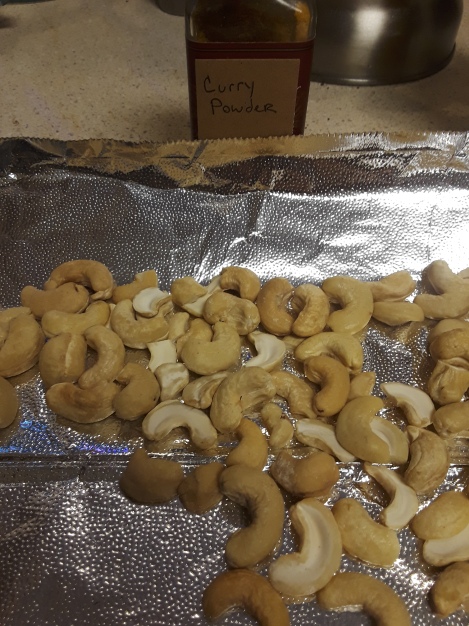 Place chicken and olive oil in a pan and bake  until cooked through. Set aside to cool, then dice into 1/2 inch cubes.

Place cashews on a baking sheet and bake in oven for 4-6 minutes until toasted.

In a bowl mix together mayonnaise, garlic , curry powder, lemon and salt.